Posted on: October 29th, 2015 by Melissa Maxwell No Comments 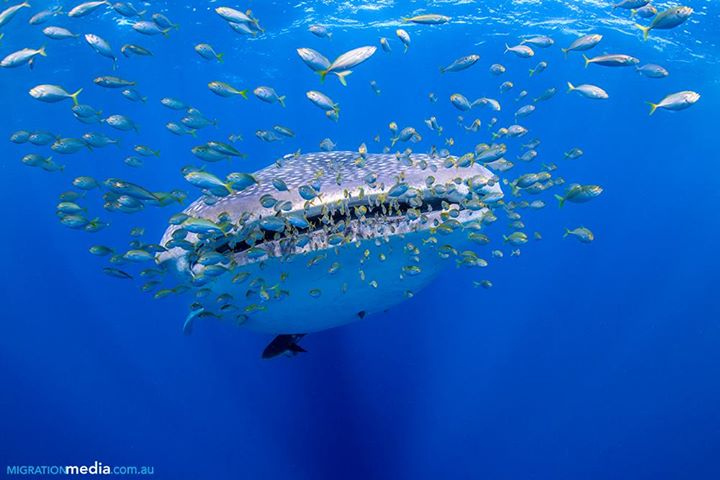 The Ningaloo Reef in Western Australia is the only place in Australia where you can swim with the majestic Whale Shark. The Whale Shark is the largest known fish and can grow up to 42 feet long. Unlike most sharks, they are filter feeders with huge toothless mouths. 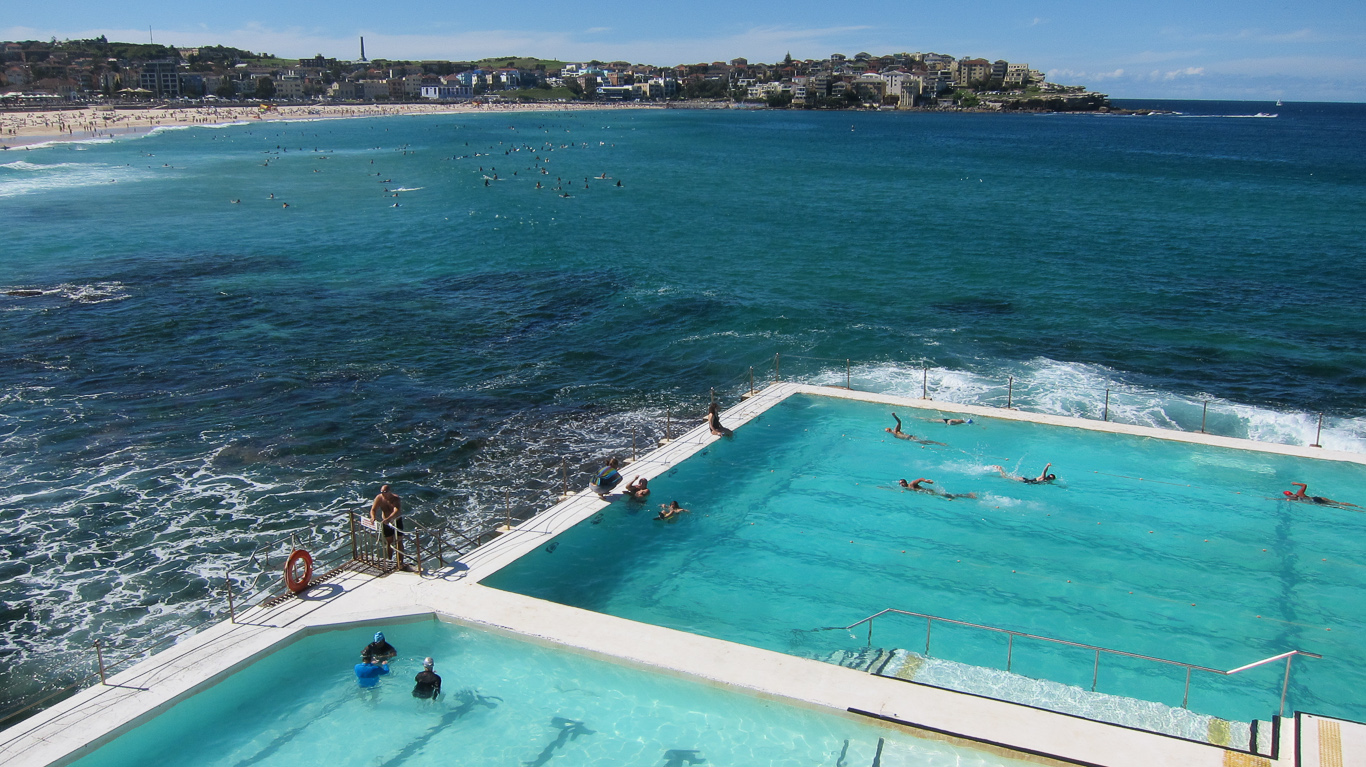 These giant pools have been a landmark of Bondi Beach for over 100 years! There is a large pool for lap swimming and a smaller pool for the kiddos. Its a great way to experience one of Australia’s most beautiful beaches during the winter. The pool is open 6am to 6:30pm, Monday through Friday, 6:30am – 6:30pm on Saturday and Sunday, and is closed for cleaning on Thursdays. It’s only $6.50AUS for adults & $4.50AUS for children. 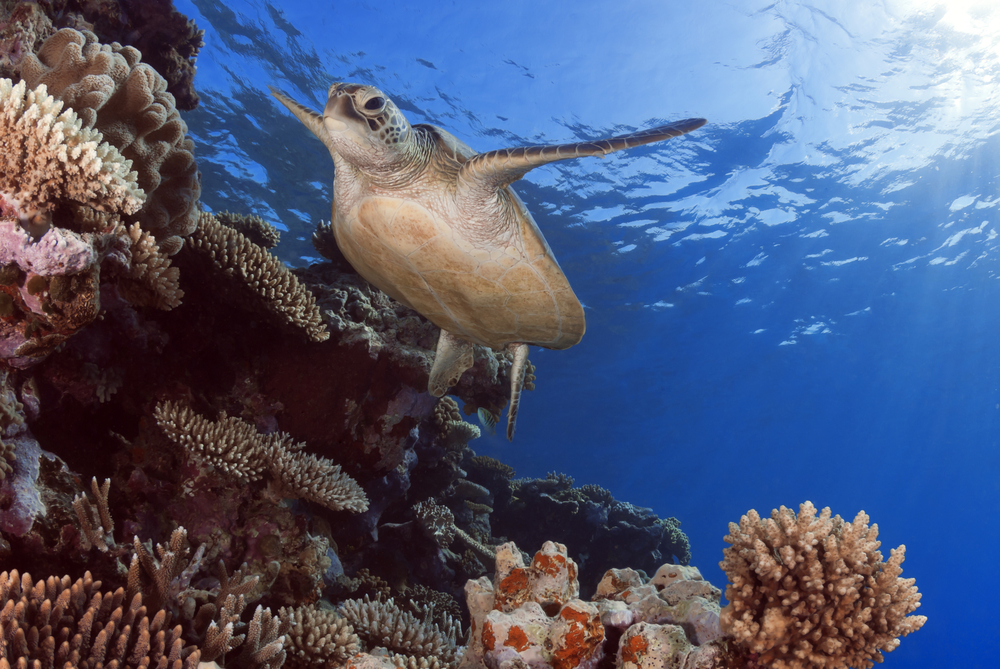 When visiting the Great Barrier Reef in Australia, don’t forget to bring an underwater camera. Whether you’re diving or snorkeling, you’re sure to run into many members of the large diverse aquatic life population, like this Green Sea Turtle. Six of the world’s seven marine turtles can be found on the Great Barrier Reef. 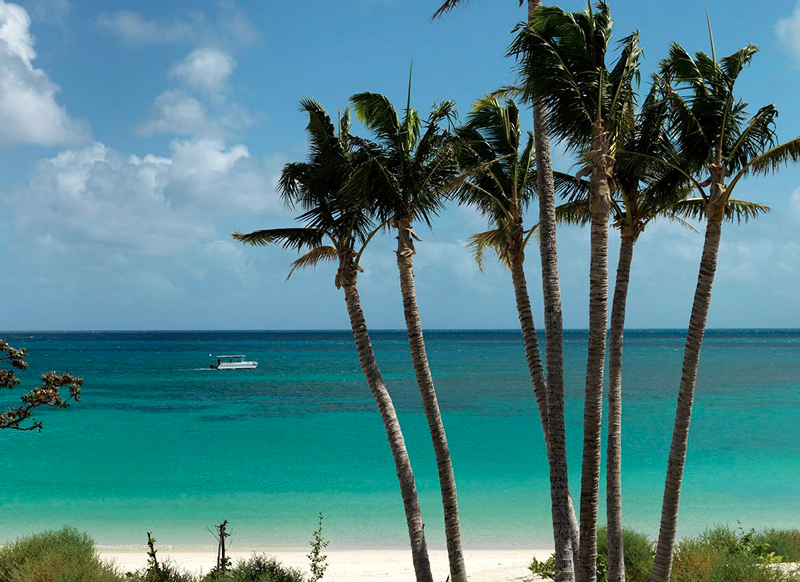 Sitting right on the Great Barrier Reef, Lizard Island has some amazing views and uniquely diverse diving conditions. Forbes.com recently published an article about the Luxury Resort of Lizard Island, saying it “may be one of the most beautiful place in the world.” The resort, complete with a recent 46-million dollar renovation, is absolutely stunning. With 24 sandy white beaches and 1,013 hectares of National Park, it’s really easy to get away from it all.

Sea Lions off the coast of Port Lincoln, South Australia

These friendly “puppies of the sea” can be found in many waters off the coast of Australia. This photo was taken in the crystal clear water of Seal Cove. So adorable! 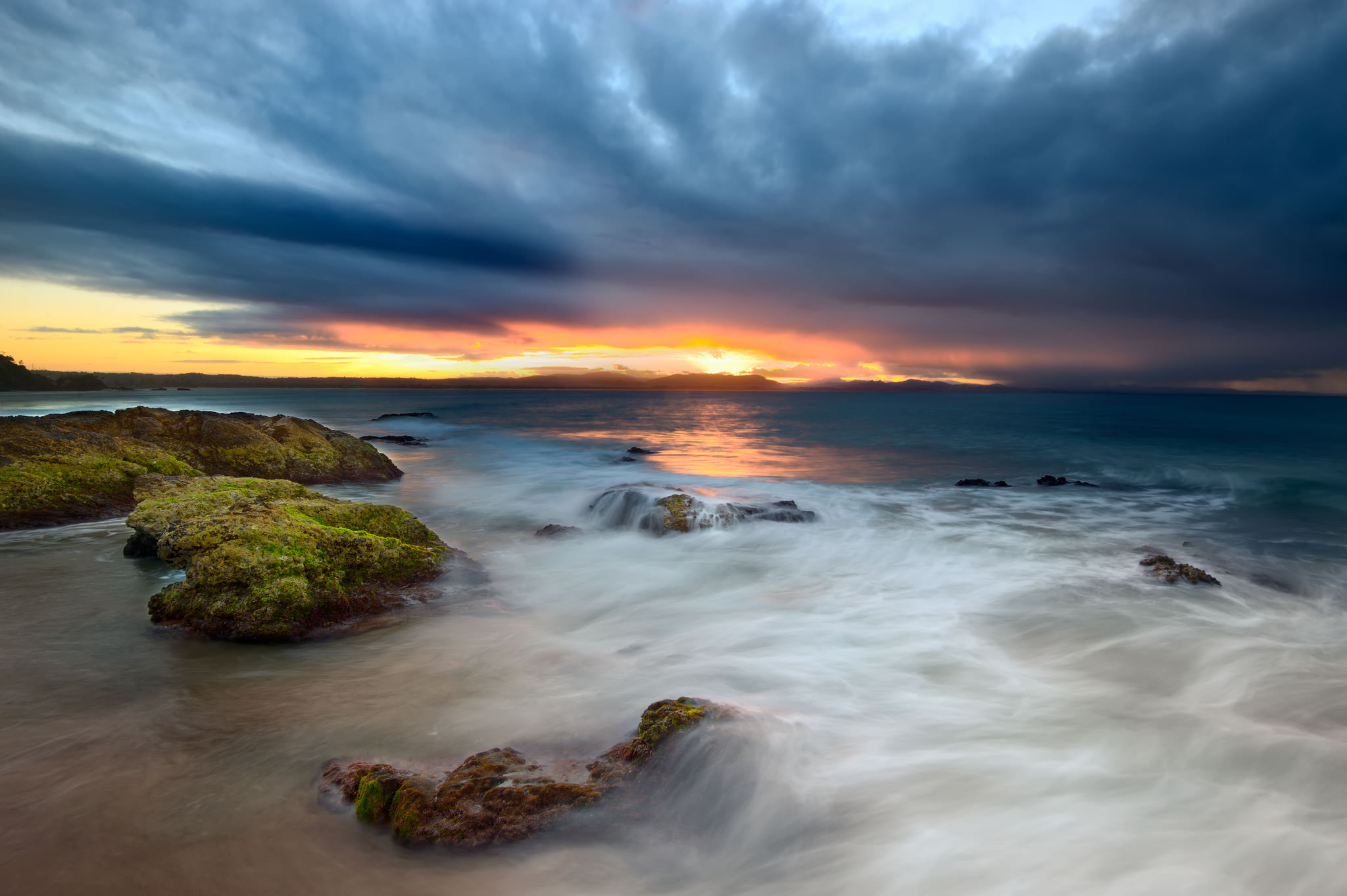 Byron Bay is a popular vacation spot among the Aussie population. So you know it’s good! It’s a laid back, new-age utopia kind of town with miles of picture-perfect coastline. Great for families, friends, couples and shutterbugs. 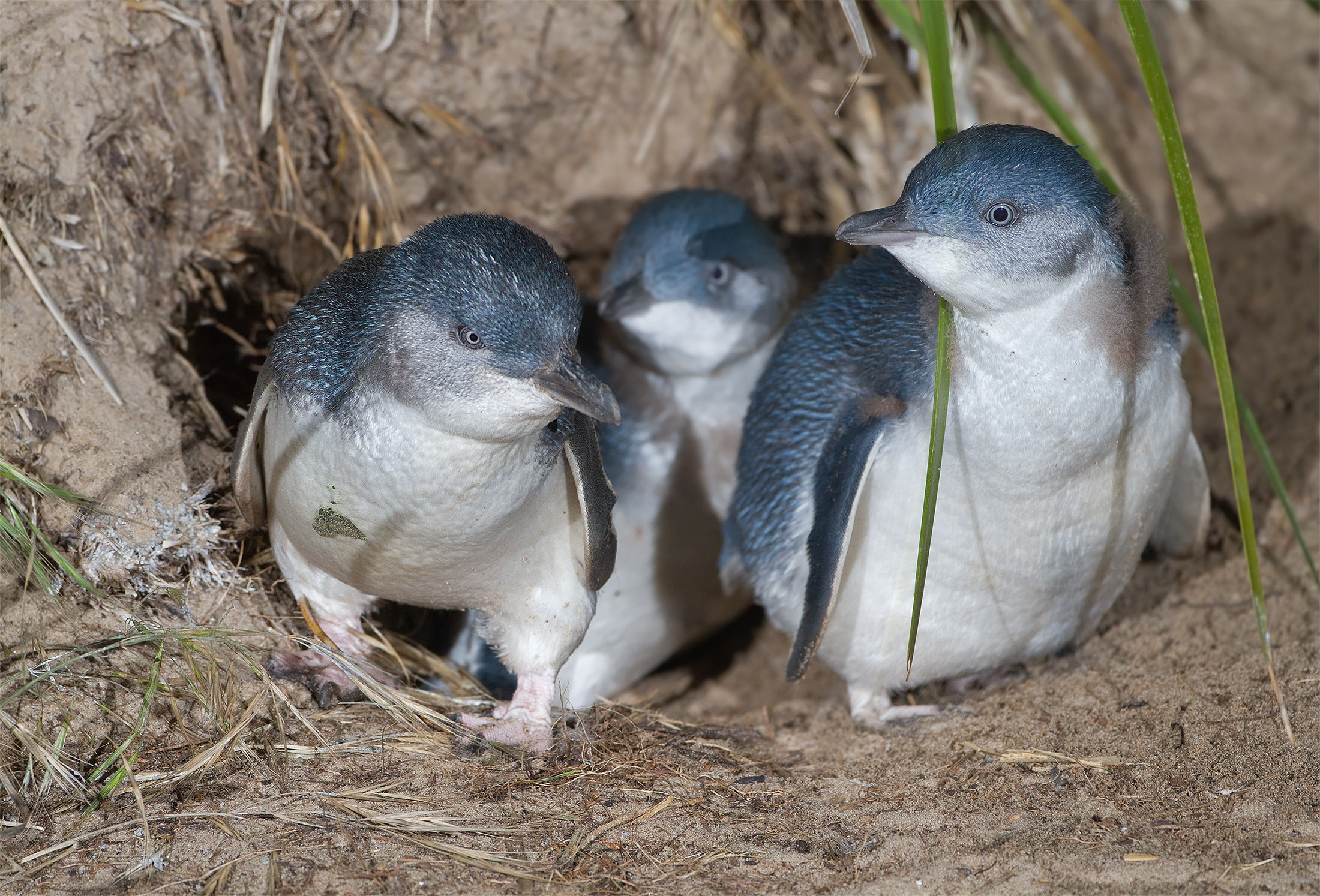 Every night a parade of little penguins marches across Summer Land Beach. Phillip Island in Victoria is home to an estimated 32,000 breeding pairs. As you can imagine, this is a very cute sight to see!

Swimming with Humpbacks off the Sunshine Coast, Queensland 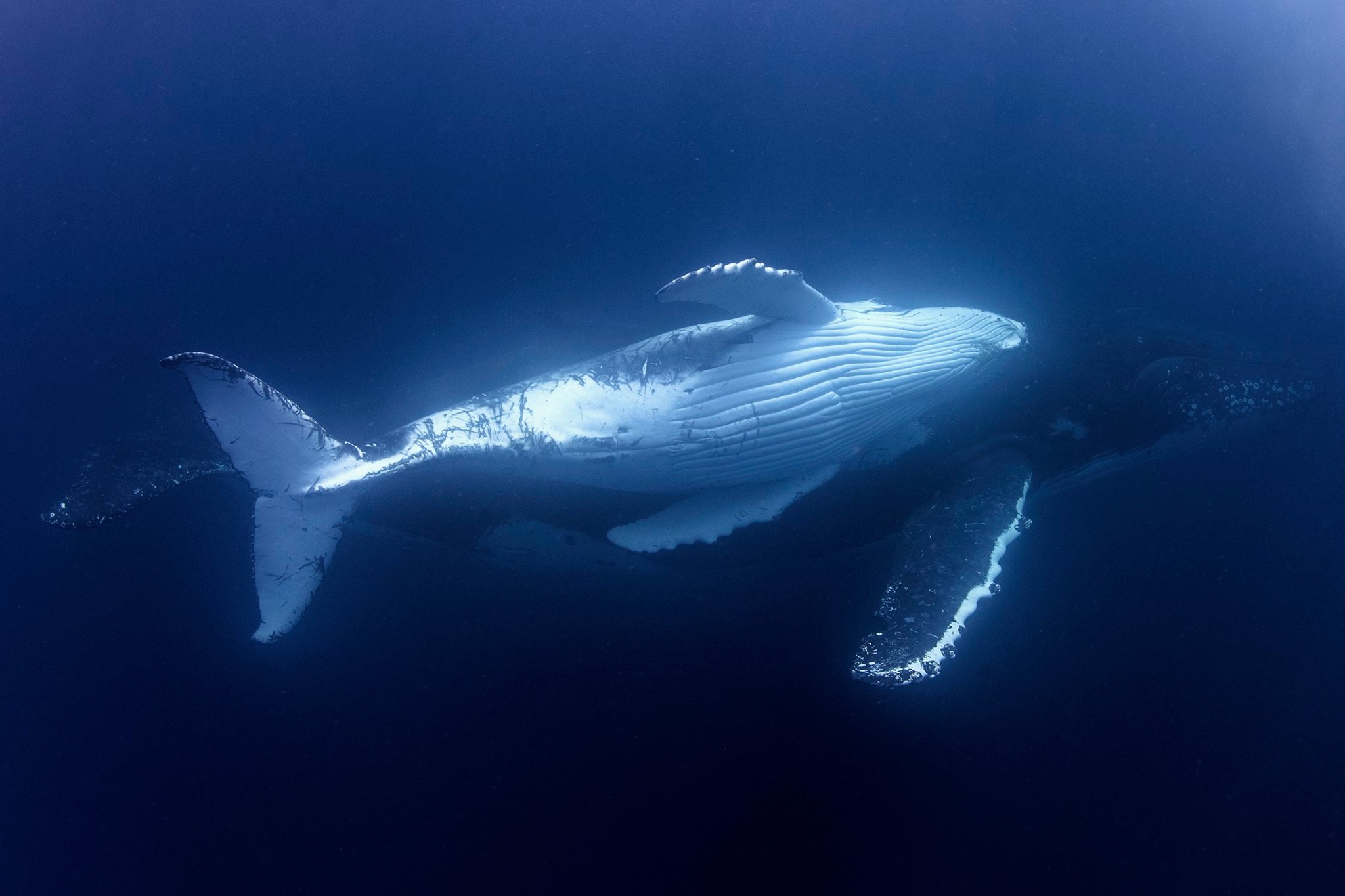 This amazing photo was taken off the coast of Queensland’s Sunshine Coast during this year’s Humpback migration season (July – October). It’s amazing to see calves swim along side their mums.

Wineglass bay, located on the Southern edge of Tasmania, is located in Freycinet National Park. These perfect contours, turquoise water and pure white beaches exist on any normal day while you’re on Wineglass Bay. 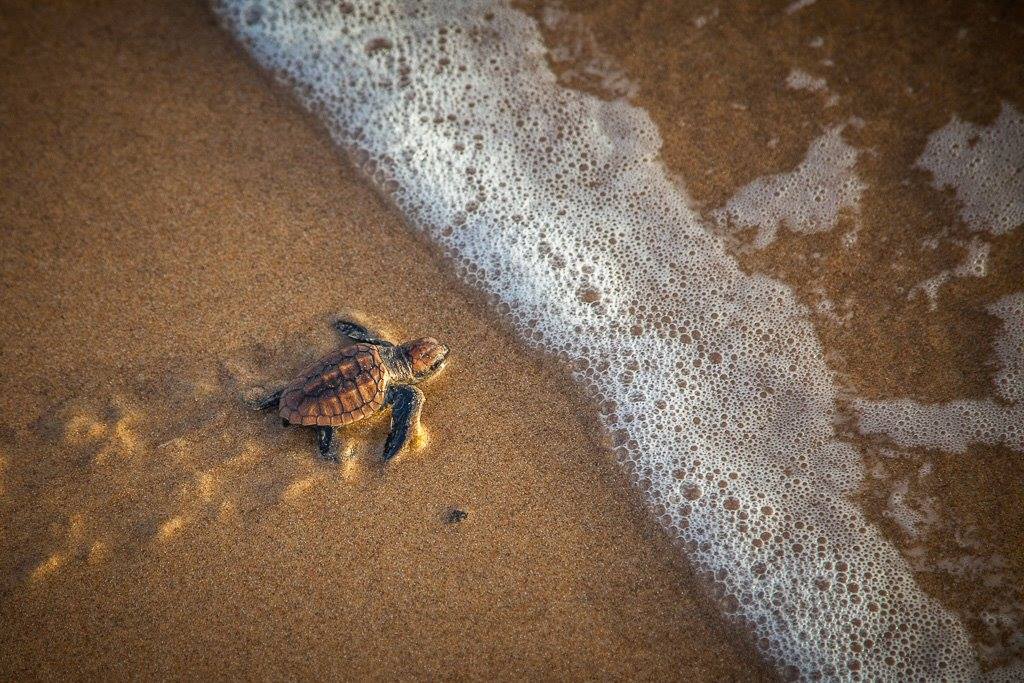 Every year thousands of baby turtles make their way to the ocean for the first time. Turtle nesting grounds can be found all over Australia’s coast. 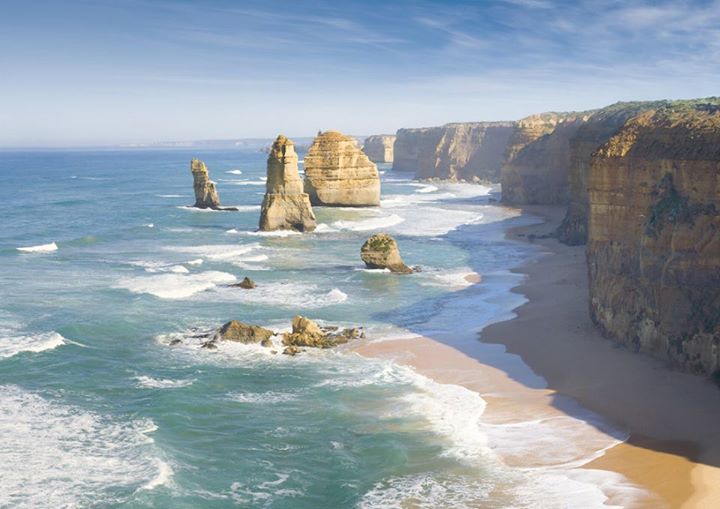 Near the Great Ocean Road in Victoria in Port Campbell National Park, you’ll find a collection of limestone stacks just off the shore. There are only eight apostles now, after the ninth one dramatically collapsed in July of 2005. Interesting fact: There were never 12 stacks, as far as we know.

Augie the Killer Whale on the Coral Coast, Western Australia 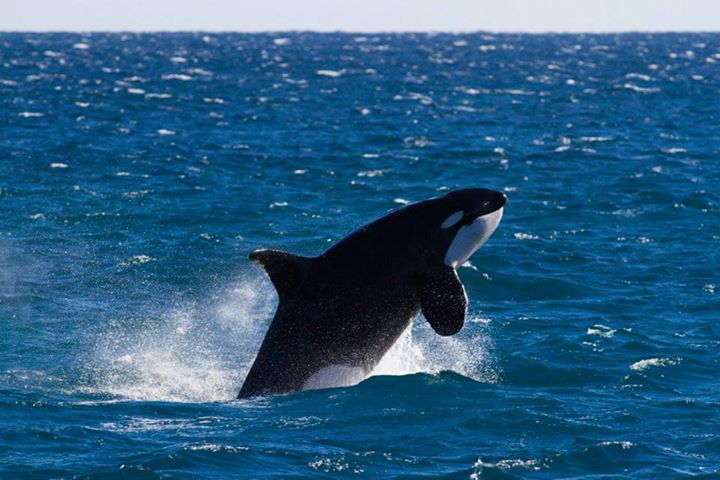 Considered an Exmouth local and regular around Ningaloo Reef, Augie the Orca is known for putting on a show. He’s been spotted multiple times performing for crowds on cruises around the reef.

Fraser Island, the world’s largest sand island, is a nature lover’s dream. Activities available include 4×4 next to the sandy cliffs, hike through the rainforest, meet native wildlife, whale-watch, comb the beaches, visit shipwrecks, and swim in freshwater lakes ringed with gold. The photo above is of the island’s most famous shipwreck, the SS Maheno. It was one of the first turbine-driven steamers. 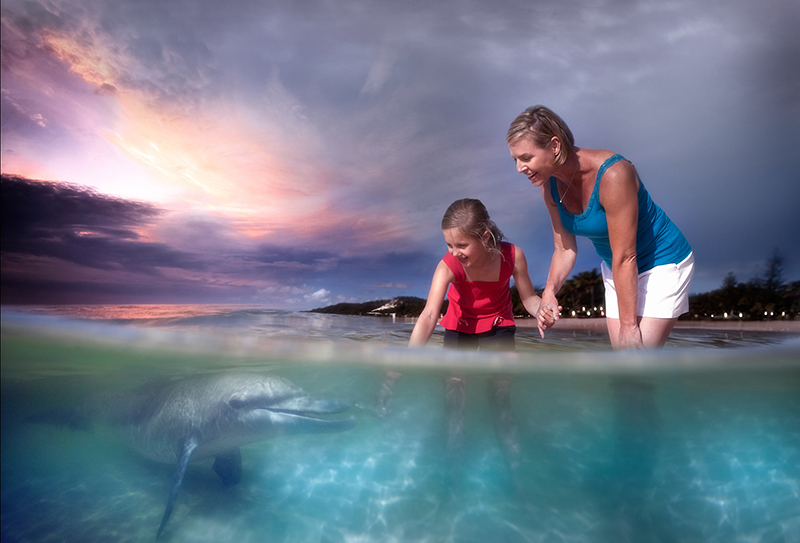 Tangalooma is the only place you’re practically guaranteed the opportunity to feed wild bottlenose dolphins during your stay. Each night at sunset up to 10 wild dolphins visit the shores of Tangalooma and everyone is invited to feed them a treat. The feeding program runs with strict guidelines to ensure the health and safety of the dolphins, but everyone still enjoys this magical experience.

You might recognize this scene from TV and movies. The Heart Shaped Reef, in Hardy Reef, is a great place for snorkeling and scuba diving. You can see this lovely sight from a helicopter or plane tour. 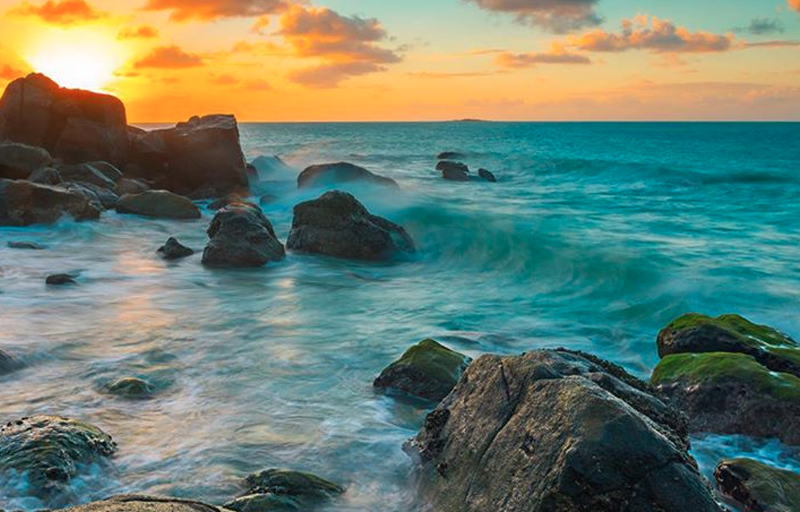 Bremer Island is at the topmost end of Australia in the Northern Territory. It’s the perfect place for a remote wilderness retreat, world class fishing, learning about the Yolngu culture, and getting away from it all.

There are so many amazing sights to see on and off the coasts of Australia. As they say, pictures just don’t do it justice.

You have to see it for yourself. Are you ready to start planning your tip to Australia?

Posted on: September 21st, 2015 by Melissa Maxwell No Comments

From the Great Barrier Reef in the east to the majestic whale sharks in the west, this list of the best underwater experiences in Australia will have you itching to get down under for an amazing dive adventure. Lucky for you, there’s never been a better time book a trip to Australia.

There’s no way around it. If you’re a diver, the Great Barrier Reef needs to be on your bucket list. It’s the biggest reef system in the world with over 2,900 reefs and 900 islands stretching 1,429 miles. That’s massive! It’s filled with nonstop underwater action and is perfect for divers of all levels. It’s overflowing with all manner of aquatic life; 380 species of coral, over 2,000 species of fish, 4,000 species of mollusks, 500 species of seaweed and 6 of the 7 kinds of sea turtles.

Stand Where the Reef Meets the Rainforest

Ok, so it’s not an underwater experience, but it’s worth a mention! Australia is home to the only place in the world where Two World Heritage Sites meet. The Great Barrier Reef meets up with the Wet Tropics of North Queensland, a group of rainforests with the highest concentration of primitive flowers plant families in the world, at Cape Tribulation and the Daintree rainforest. This majestic site offers a glance into what the world was like when dinosaurs roamed the earth. (Along with really great diving close by!)

Just outside of Cairns, in the northern reaches of the Great Barrier Reef, you’ll find the Ribbon Reefs. The ten reefs, simply named Ribbon Reef 1 through Ribbon Reef 10, stretch for more than 50 miles along the edge of the continental self and offer legendary diving for all levels of experience. There’s even really great snorkeling!

As you explore the Ribbon Reefs you are also likely to find everything from large Maori wrasse to leopard morays, playing clownfish to large aggregations of batfish, bommie to whitetip reef sharks, and uncountable species of anemonefish.

Dive in June or July and you’re almost guaranteed to swim with a Minke whale.

Come Face to Face with a Giant Potato Cod

Found in “Cod Hole” (Ribbon Reef #10) these giant grouper are extremely friendly and accustom to being hand fed. Find them off the coast of Cairns, Australia or Lizard Island on the North End of the Great Barrier Reef.

Take a Live-aboard out to North Horn, Osprey Reef for an amazing shark frenzy experience. The North Horn of Osprey reef is a unique diving landscape with the reef starting 16 feet below the surface, sloping to 131 feet and then making a vertical drop to around 1,312 feet. It feels like an oasis of life in the middle of a desolate sea and deep sea creatures are known to stop by for a visit. It’s a place where 2 ocean currents converge and a place famous for it’s shark dives.

Silvertips, grey reefs, grey whalers, white tips and even hammerheads come to the site for an easy meal. When the dive operators drop the bucket, the intensity of the free-for-all reaches a fiver pitch. The sharks are accustomed to this feed and ignore the divers as they tear into their meal. You’ll get a nice adrenaline rush, without much actual danger.

This large personable fish can be found on reef slopes and lagoon reefs on The Great Barrier Reef. They are one of the few fish that eat the reef’s toxic arch enemies. With their large lips, comical eyes and friendly personalities they make great selfie buddies!

Swimming with sea turtles is a dream come true for many divers. The Great Barrier Reef is home to 6 of the 7 species of turtles in the world. One of the best places to swim with sea turtles (Green and Loggerhead) is from Heron Island. The reef surrounding Heron Island is also home to around 60% of the 1,500 species of fish and 72% of the coral species found on the Great Barrier Reef.

Dive the Great Barrier Reef and you are almost guaranteed to find him.

You don’t even have to be a diver for this one but an Australian aquatic wish list wouldn’t be complete without the majestic whale shark. Don’t worry, whale sharks don’t have teeth. For this amazing experience head to Ningaloo Reef on the Coral Coast in Western Australia between mid-March and the end of July. Not only will you swim with the whale sharks, but you’ll see an abundance of reef life such as manta rays, dolphins and turtles.

The seawater cousin of the manatee, the Dugong or sea cow can be found on the Coral Coast of Australia. Shark Bay and Ningaloo marine parks supports about 10% of the world’s population.

You won’t find Great Whites on the Great Barrier Reef so the adventurous types should head to Port Lincoln in South Australia to catch a charter and cage dive with the sharks. The pristine waters off Neptune Islands make it one of best places to see sharks in their natural habitat. The cages keep you from becoming dinner.

Scuba with a Leafy Sea Dragon

These interesting creatures can be found hiding in the kelp leaves and seaweed off the coast of southern and eastern Australia. Many divers travel to Australia only to find that the leafy sea creatures are tough to spot. Make sure to ask your destination specialist about the best places and times to see the elusive Leafy Sea Dragon.

Traveling to Australia for a dive trip is on nearly every diver’s Bucket List. Have you had the opportunity to experience it?

Luckily, there’s never been a better time to travel to Australia. 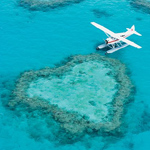 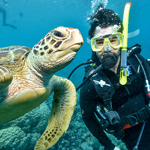