Outback Must-See: Things to Do in Uluru National Park

Posted on: July 13th, 2017 by About Australia Staff No Comments 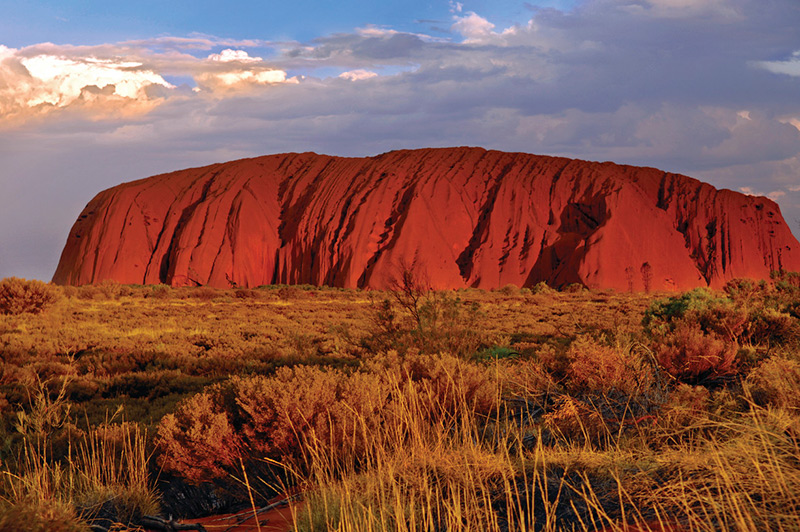 Uluru, also known as Ayer’s Rock, is one of the most important historical sites in Australia. The Anangu people, a group of Aboriginal Australians, revere Uluru as a sacred, holy site. They believe it is evidence of the creation of their culture by ancestral beings.

Aboriginal Australian’s lived off the land in Uluru and all of Australia for more than 60,000 years before European settlement. In fact, they are even said to be the world’s oldest human civilization.


The immense monolith of red stone shoots up out of the Earth, shouting its significance across the desert. The deep red sandstone and surrounding clay look like some kind of Martian landscape. It’s no wonder they call it “the Red Center”.

Aside from the amazing historical significance of the site, there are plenty of things to do in Uluru that make it a must-visit destination in Australia.

Uluru’s immensity is almost hard to comprehend in photos. For instance, did you know that this tremendous “land-iceberg” is taller than the Eiffel Tower? At nearly 1,200 feet tall, Uluru is 3 times taller than the Great Pyramid in Egypt. It’s also about the same height as the Empire State Building!

If you really want to appreciate Uluru’s size and massive footprint, set aside about 4 hours for a walking tour. That’s how long it will take you to walk around the base of the giant rock. Along the way you’ll see unique plant life, diverse wildlife and geological features that make up this important site.

But be sure to stick to the base walk. Though Uluru’s peak is a tempting destination for the avid mountaineer, out of respect for the Anangu people it is not advised to climb to the top.

Dine under the stars with an amazing desert night dinner. The Sounds of Silence dinner is an Aussie Hall-of-Fame experience that wines and dines you in the heart of Uluru National Park. You’ll start the evening off with light appetizers and your choice of an array of fine Australian wine and beer.

As the sun sets, you’ll see the Red Center’s colors morph with the light, from bright reds to deep purples. 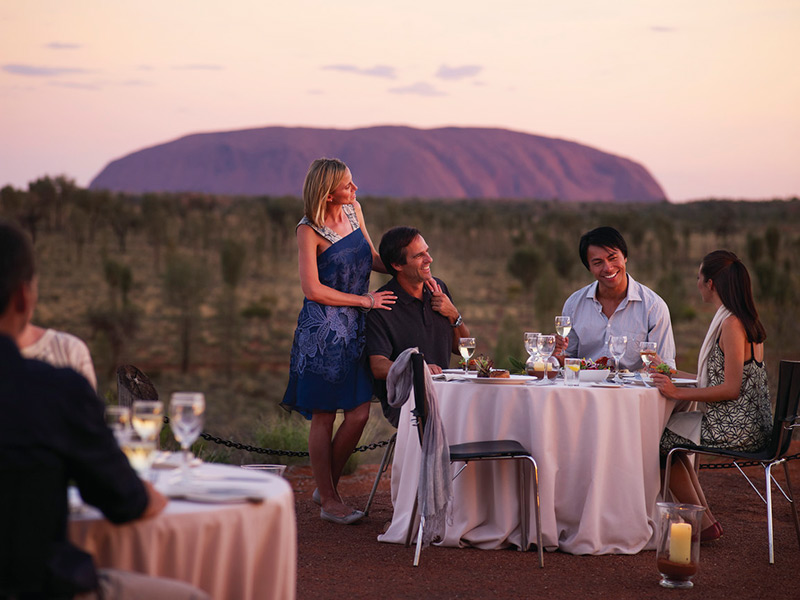 Darkness envelopes the desert and the faint light of thousands of stars begins to twinkle, a bush-tucker inspired buffet dinner is served. The buffet incorporates local and indigenous cuisine and native bush ingredients.

Then, an expert guide will take you on a historical journey of the southern night sky. See the constellations of the zodiac, the prominent star cluster of the Milky Way, other planets and their moons and more.

The Sounds of Silence is part al-fresco dinner under the stars, part astronomical stargazing tour and all-around amazing experience.

For more incredible memories of Uluru National Park, add on a visit to the “Field of Light” art-installation. Famed artist Bruce Munro was commissioned to bring his luminary works of thousands of solar-powered twinkling lights to Uluru. For this installation, Munro upped the intensity of his normal installations to match the grandiose nature of Uluru.

You’ll walk through the dense, sprawling web of soft lights that blanket the desert. With thousands of stars visible overhead and the thousands of lights that turn the desert in to a galaxy of its own, the Field of Light is a sensory experience you’ll never forget.

The Field of Light is only running through December 2020, so if you want to see this web of woven light that blankets the desert (and trust us, you do!) – act fast!

While climbing Uluru is not explicitly prohibited, or against Australian law, it is very much frowned upon and discouraged by the Anangu people as well as most Aussie locals. Since Uluru is a holy site for Aboriginal people, it is seen as highly disrespectful to walk on or climb. 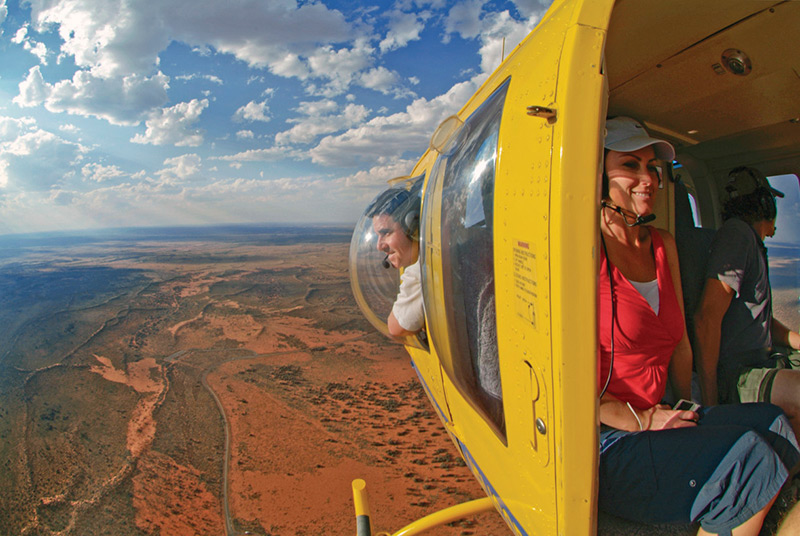 However, there are ways to see Uluru from all angles, including the very peak. A scenic helicopter ride around the Red Center is one of the best ways to observe the area and see the 1,200 foot peak.

You’ll hop aboard with an expert pilot as you are flown around Uluru National Park. See the numerous, massive domes that make up the Olgas, just south of Alice Springs. A scenic helicopter ride is one of the best ways to appreciate Uluru and the whole Uluru-Kata Tjuta National Park area.

Where would you say the largest population of camels live? Morocco? Saudi Arabia? Oddly enough, the answer is Australia! Though camels are not indigenous to Australia, they were imported in the 19th century for transportation and field work. Since then, their populations have exploded and more than 700,000 live in Australia. 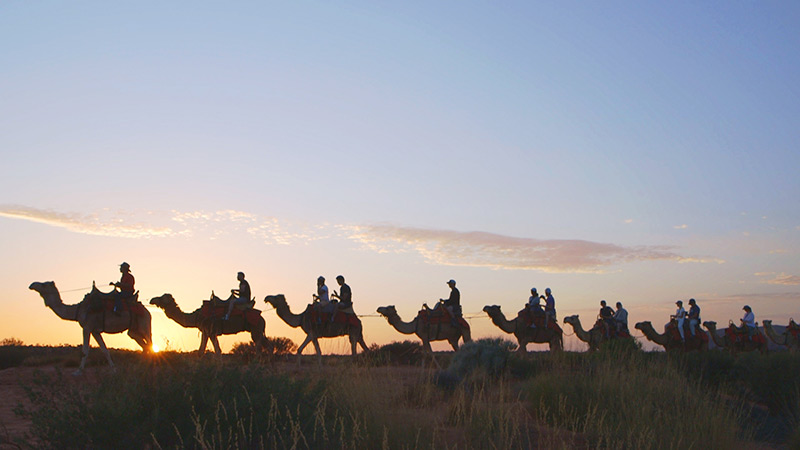 Mount up on a camel for an amazing ride in the Australian outback. Your camel train will take you around the Uluru National Park area where you will witness the sunset and the changing colors of the Red Center.

The Sunset Camel Ride takes you off the beaten path, away from the crowds of tourists at Uluru. Listen close as your camel pack leader regales you with informative and interesting stories about Uluru’s plants, animals and history. This is the most unique way to see Uluru National Park and an experience you’ll never forget.

Stargazing in most cities just isn’t what it used to be. With always-on street lights, car headlights and densely populated urban areas, light pollution washes out up to 90% of visible stars in the sky. If you’ve never been in the remote back-country and looked at the stars, you might think that the Milky Way is just something we can see with telescopes or in pictures.

The Uluru National Park area is one of the most remote and darkest sites in the world. The lack of light pollution makes it an incredible spot for stargazing. Even before the sun completely sets, the twinkle of astral lights begins to blanket the sky. Once pure nightfall hits, the sky is awash in star clusters, constellations, planets and moons.

Go out with an astro-tour group and you’ll have the added benefit of binoculars, telescopes and an expert astronomer guiding you through the night sky.

Looking to make your visit extra special? Longitude 131 is a luxury destination at the gateway of Uluru National Park. Experience the rugged outdoors of the outback during the day. Then, come home to a world-class, full-service accommodation at night. Each luxury lodge is eco-friendly, spacious and feature huge floor to ceiling windows for epic views of the outback. Dine on five-star cuisine and premium wine and drinks. You can also take part in exclusive small-group tours for guests. 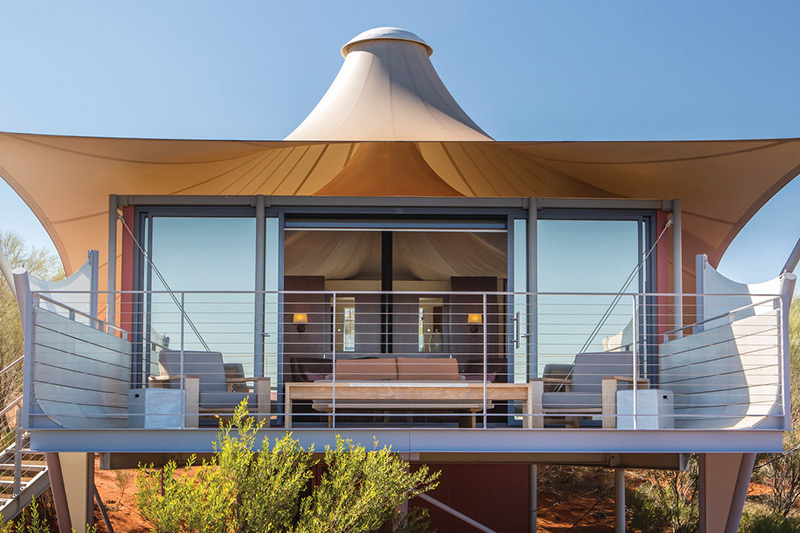 Longitude 131 is the perfect accommodation for couples. Celebrate your anniversary, honeymoon or other special occasion in one of the most unique destinations in the world.

You’ll want to make the extra trip out to see Uluru and Uluru National Park. Since Australia is such a large country, getting out to Uluru requires a bit of planning. We’ll get you there without a hitch. Don’t leave anything to chance in this once in a lifetime cultural journey. Uluru has been described as breathtaking in it’s beauty and moving in its cultural significance – it truly can’t be missed!

Add Uluru to My Trip