Experience the wonder of one of Nature’s great migrations as the Humpback and Southern Wright whales journey between Antarctica and their winter feeding grounds as far north as the Great Barrier Reef. 2 hour tour. 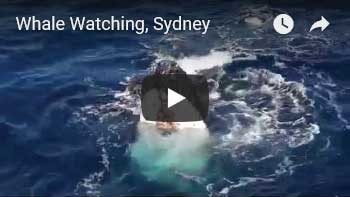 Whale watching commences in mid May and go until the beginning of December each year. In May, the Humpbacks begin passing by Sydney on their Northern Migration, by early August these whales have moved onto their breeding grounds up north. From July to September we have the Southern Right whales, Humpbacks and dolphins visiting the coast not to mention the great albatrosses and other winter sea birds you rarely see anywhere else in the world. Mid to late August to the beginning of December sees the return of the Humpback whales on their Southern migration. We have a 98% successful sighting rate on our cruises, so we offer our whale guarantee.

On departure you will have the opportunity to also see the famous Sydney Harbour Bridge, Sydney Opera House, Fort Denison and the Outer Harbour as we travel out to the heads.