Take time on your Australia self-drive or day tour to experience Victoria’s Great Ocean Road from a helicopter! 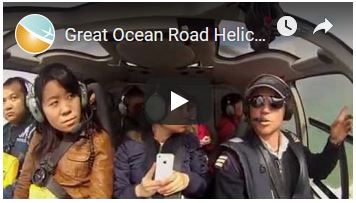 Experience panoramic views of Victoria’s amazing coastline. Fly over the spectacular Twelve Apostles and Loch Ard Gorge, then see the charming town of Port Campbell from above.

Travel further along the majestic coast to London Bridge, which collapsed in 1990 leaving two people stranded on the newly formed island. Other incredible features you’ll see along the way include The Sentinel, Two Mile Bay and Point Hesse.

Need to Know Minimum of two passengers required Maximum of 7 passengers allowed. Groups of four or five passengers who would like to fly together will need to share a flight with other customers if available or split into two groups no greater than three. Passengers must weigh less than 300lbs each. Total passenger weight combined must be less than 660lbs.

Upgrades: This amazing 15-minute helicopter ride can be upgraded at an additional cost to include any of the following:

1. Flying beyond the London Bridge you will continue on to the Bay of Islands. These smaller versions of the Twelve Apostles seem to float in the ocean. (25 min)

2. Add on the entire Shipwreck Coast with this ultimate helicopter ride. Making your way down to Cape Otway, the southern-most point of Western Victoria. You will learn about Castle Cove and Wreck Beach. See the 150 year old lighthouse, built solely to prevent any further shipwrecks along the coast. (50 min)