Starting at
$1,090
Per Person
View Details

Travel to your accommodation in Melbourne, Australia, where you will be staying whilst on vacation for 2 nights.

Your 4 Star vacation accommodation is located in the heart of Melbourne, Australia. Its suites are equipped with kitchenettes, air conditioning, and ensuite bathrooms. Most are facing on to the hotel’s private European style courtyard. The vacation accommodation is close to Chinatown. Or perhaps stroll to the Southern Cross Station and travel by tram throughout the city. For the less adventurous, Melbourne is the perfect launching pad for day tours to such places like Phillip Island and Penguins, or perhaps the Great Ocean Road.

Spend a day on a tour of the most beautiful section of Victoria’s south coast, an adventure along the Great Ocean Road.

Enjoy one of the world’s greatest coastal drives – it’s severity and striking contrasts will remain etched in your memory forever. Enjoy views of Melbourne and Port Phillip Bay from the West Gate Bridge, Stroll along the pristine sandy beaches and wander through the sleepy seaside holiday towns. Discover the deep lush fern gullies and eucalypt trees that roll down to the sheer cliffs that plunge dramatically into the ocean. View majestic monoliths dramatically protruding from the sea including the Twelve Apostles which are the world’s largest coastal limestone towers – an awesome spectacle. Marvel at Loch Ard Gorge and London Bridge – millions of years of erosion have sculpted these incredible landmarks.

Departs Melbourne at 8:00 AM
Returns to Melbourne at approximately 7:30 PM
Upgrade available to include lunch.

As you cruise the scenic streets of Melbourne, you will enjoy fine cuisine and drink the very best of Australian wines. The atmosphere is cosy, the service friendly and the decor as inviting as the colonial period these trams reflect. 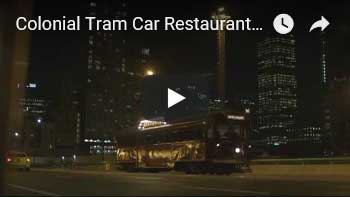 The Colonial Tramcar Restaurant officially commenced operation in August 1983. These glossy, burgundy restaurants on wheels are the first travelling tramcar restaurants in the world and ensure a delightful innovative approach to dining. Dining aboard the Tramcar is not only a culinary delight, but also a trip into a little piece of Victoria’s history.

The tram is air-conditioned for total comfort and piped music helps to create a unique mood on wheels. Smart casual, suit or similar dress is appropriate when dining.

Mingle with visitors and locals alike at the centre of the city known as Melbourne’s meeting place, Federation Square! Showcasing a creative mix of attractions it boasts 15 restaurants, cafes and bars and over 2000 events annually making this a must see in Melbourne! 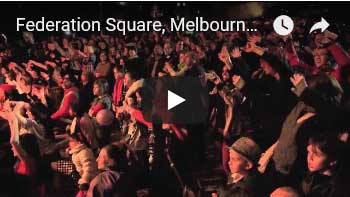 Winner of the 2006 and 2007 Victorian Tourism Awards, Federation Square embraces some of the world’s most stunning architecture with a wide array of attractions. Situated on the traditional lands of the Kulin Nation the Square supports the nation’s contemporary expression and values the heritage and traditions of the indigenous people of this area. Be sure to check out the Atrium, a major challenge made of glass, steel and zinc.

Flanked by Zinc, this centre provides access to The Square which features the paved sandstone cobbles from Western Australia and spectacular views of the City, Southbank and the Yarra River. Don’t forget to make a stop off at the Wharf which offers up the Riverland Bar and Cafe, Hire-A-Bike, Ferry Boat Drop off and Pick Up Service.

If you just happen to be in Melbourne on a Thursday night be sure to take advantage of the late night program! Open until 9pm, the Ian Potter Centre is the world’s first major gallery dedicated exclusively to Australian art which showcases a spectacular array of over 20 galleries housed within this landmark architectural complex. Also open until 9pm, don’t miss the Australian Centre for the Moving Image which is the first centre of its kind in the world with its dedication to the moving image in all its forms – from early cinema to the latest digital media – it certainly offers a unique experience for visitors from around the globe.

Discover Australia as you travel by rental car for three days.

As part of your vacation self-drive Australia and explore our stunning landscapes, coastlines, regional towns and wildlife. Stop and meet the locals, maybe enjoy a counter meal at a local Aussie pub, or relax on the beach while sampling some takeaway fish & chips from the local deli or servo. During one of your rest stops try to spot a kangaroo, emu or even a Koala in the wild.

Please bring a valid American drivers license with you and be aware that the Australians drives on the left hand side of the road.

Base rate only paid by About Australia. GPS, Insurance, Premium Location Surcharge, Fuel and Fees to driver’s credit card.

Enjoy your Self Drive Tour through regional Victoria, Australia: starting in Melbourne, then passing by the Puffing Billy Steam Train, on route to Phillip Island.

When most people think of Phillip Island they think of Penguins, but you might be surprised to hear that there is so much more offered here. Phillip Island Grand Prix Circuit is fun for the whole family. You can race around on the go kart track or you can strap in for the real deal and ride in a race car with a professional race car driver! Stroll around the Koala Conservation Centre and enjoy the bushwalking tracks where you can spot native Aussie animals in a natural environment.

Note: Make sure you have spare time at least 1 hour prior to sunset. The Penguin Parade begins at sunset and is truly a must see at the Phillip Island Nature Park. Stay on Phillip Island. Continue on to your next Australian destination.

Next stop along your coastal self-drive is Phillip Island, Victoria, where you will spend 2 nights.

Just a 90 minute drive from Melbourne and conveniently located in the centre of Phillip Island, this resort is only 2kms from the Cowes shopping precinct with its safe bay beaches and only 3kms from the Phillip Island Grand Prix Circuit and the popular patrolled surf beach of Smith’s Beach. With family friendly facilities including a restaurant and bar, a wood fired Pizzeria, outdoor swimming and toddler’s pool, gym, spa, sauna, Kidz Zone game room, playground, tennis, BBQs and kilometres of walking tracks, you will truly enjoy this resort!

Do you want to see a koala up close in its natural environment? Come visit the treetop & woodland boardwalks at the Koala Conservation Centre.

Experience wild koalas in their natural habitat and stroll through Aussie bushland at this environmentally sustainable centre dedicated to koala conservation on six hectares. Originally established in 1991, the centre is dedicated to koala research and conservation and has played a vital role in ensuring there is a protected koala population on Phillip Island.

Enjoy 2 boardwalks, the Koala Boardwalk and the Woodland Boardwalk. On the bushwalking tracks, keep an eye out for wallabies, echidnas, birds and other Aussie wildlife. Learn about the amazing lives of koalas in the interactive Visitor’s Centre. The Koala Conservation Centre is also home to a host of Australian Wildlife such as wallabies, nocturnal brushtail and ringtail possums, echidnas and over 80 species of birds.

Phillip Island Grand Prix Circuit is just 90 minutes southeast of Melbourne and has a range of activities that will simply drop your jaw and dazzle your eyes.

This is your chance to experience the iconic venue in the flesh. Let rip in a go-kart on our 760m replica Grand Prix track, or buckle in for the real deal; an adrenalin-amping triple Hot Lap lightning ride around the Phillip Island circuit with an experienced racing driver.

Revisit the heart-pumping history of the venue within the Visitor Centre’s History of Motorsport Display. Follow in the footsteps of motorcycle racing champions on the Guided Circuit Tour, allowing you exclusive access to off-limits areas trackside, including Race Control, Media Centre, Pit lane, Pit Roof and, where every racer would love to finish, the winner’s podium being sprayed with champagne.

The ride is only half the experience.

(Day 5) - Self Drive from Phillip Island to Mornington Peninsula, Victoria

Self Drive from Phillip Island to Mornington Peninsula.(approx 1.5 hrs)

Self Drive through regional Victoria via Mornington Peninsula.

DAY 1: MORNINGTON PENINSULA
This morning hop on the highway toward Mornington Peninsula. While on the peninsula, enjoy excellent restaurants, regional wines, or take a stroll along the beach and see the iconic bathing boxes. This is truly a sight to see and a colorful photo opportunity. If you would like to get up close with more of Australia’s unique wildlife, stop in the Moonlit Sanctuary at Pearcedale. Spend one night on Mornington Peninsula.

Customize your Self Drive to Regional Victoria via Phillip Island & Mornington Peninsula?

Remember, this road trip is fully customizable. Combine it with other destinations, add accommodation, sigthseeing tours and flights (international &/or domestic).

Just let us know what you want and our Travel Experts will design your complete itinerary with a ‘no-obligation’ quote.