Enjoy a gourmet meal at Cairn’s most rewarded restaurant and mingle with the locals. 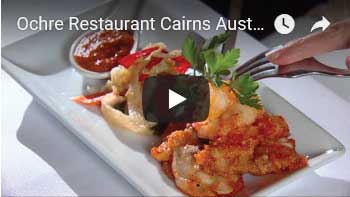 Perhaps the best known of all Cairns restaurants and catering companies is the multi award-winning Ochre Restaurant and Catering, serving modern Australian cuisine with flair and creativity. Owner, Craig Squire is the talented chef who has worked tirelessly to make Ochre the success it is today. Often found in the kitchen where he prepares and perfects Ochre’s menu of dishes, Mr Squire is a wanted man (in the guise of guest chef) in many of the world’s classiest establishments be they the five-star kitchens of restaurants and hotels from Dubai to Shanghai. Ochre Restaurant specialises in local and native produce with a daily catch of seafood and premium Australian beef tenderloin most recently recognized as “Best Beef” at Royal Brisbane Show.

Some of their most famous dishes include Salt and Pepper Prawn and Crocodile, Grilled Kangaroo with Quandong Chilli Glaze, Wattleseed Pavlova and their Australian Antipasto Plate – the latter of which is a great meal to start giving diners a delicious insight into the country’s cuisine.

The menu is an excellent read for any visitor and delivers on taste and value-for-money. Be sure to leave room for dessert which the Lonely Planet Guide urges its readers to try with the quote desserts worth moving to Cairns for.

Ochre Restaurant is Cairns most awarded restaurant. Late in 2006 it increased its cache winning both Best Modern Australian and Tourism Restaurant categories at North Queensland’s Annual Restaurant and Caterer’s Awards and has continued to win many local awards since.

This restaurant is a short walking distance from most accommodations in central Cairns.