Posted on: May 23rd, 2017 by About Australia Staff No Comments

You’ve seen the Opera House. You even cruised the Harbour. You think you’ve seen it all. Time to pack up and go off to the next city, right?

If you leave Sydney without seeing the Royal Botanic Gardens, you’ve missed one of the most beautiful parts of the entire city.

Sydney is huge. It can’t be boiled down to just those two landmarks. Don’t get us wrong, they are amazing, must-see destinations. But it should be criminal to miss seeing this idyllic park right on the iconic Sydney Harbour.

We’ll show you why you’ll love this floral oasis just as much as we do in our guide to the Royal Botanic Garden Sydney.

Keep your camera at the ready, because every which way you turn is a great backdrop for a photo. Sunny skies most days out of the year keep the flowers blooming, the trees thriving and the grass plush – year round. Your friends will be green with envy. See the Opera House in the morning and then walk on over to the Garden. It’s a great one-two punch of the best sightseeing in Sydney.

Enter through the Queen Elizabeth II gate and take the winding, perfectly manicured path through native plants and pristine greenery. This entrance runs along the water’s edge for great shots of Sydney Harbour.

From there, stroll toward Government House, the current official residence of New South Wales’ governor. Even better, we think you’ll dig the architecture of this sprawling 1800’s-era mansion that looks like something from King Arthur’s Court! You can even catch a tour of the inside of the building, whose design hasn’t been changed in over a hundred years.   Exit the mansion and head for the Australian Native Rockery. Walk among picture-perfect examples of native Australian flora. Sit on the lawn facing Sydney Harbour for amazing views of the Opera House and Harbour Bridge.

Tip: This is one of the best places to get shots of three Sydney landmarks in one! If you look close, you may even see climbers in the distance participating in a Harbour Bridgeclimb!

Love is in the Air

There’s just something romantic about walking through a garden. Especially when that garden has more than 2000 huge, fully bloomed roses of all colors surrounding you (OK, maybe that’s a bit on the nose). Nevertheless, we dare you to walk through this sea of reds, whites and pinks and not feel at least a little lovey-dovey. Let that sweet, floral scented air envelope you and you’ll see why the Royal Botanic Garden is one of Sydney’s most popular wedding spots.   Look above for a great view of towering downtown Sydney skyscrapers looming overhead. A reminder that this serene, green garden is an oasis just minutes away from the hustle and bustle of the central business district.

Using the Royal Botanic Garden as a historical backdrop, you’ll learn about the rich, Aboriginal heritage of the Garden. Your guide will show you useful and medicinal plants in Aboriginal culture, see ancient artifacts and taste traditional bush foods. Heritage Tours are 100 percent Aboriginal owned and all proceeds support Aboriginal jobs and communities.

Tip: Go for a longer Aboriginal heritage tour that takes you through the Garden at Sydney proper. You’ll get in-depth insight in to the rich Aboriginal cultural history. 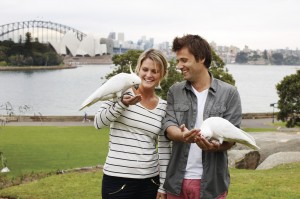 Ask the average person what they think of when they hear “Australia” and you’ll most likely get one of three answers. The Outback, the Great Barrier Reef and of course, the wildlife. The kangaroo, the koala, the crocodile, the dingo… The list of iconic animals that call Australia home goes on and on. And the Royal Botanic Garden is no exception.

Among the animals that have found the Garden’s prime real estate the ideal place to set up shop are the sulfur-crested cockatoos.

Named for the sulfur-colored yellow streak that adorns the tops of their heads, these ivory-and-yellow feathered birds are found in many areas of the Garden. They have become increasingly friendly with humans due to hand feeding, but it is not recommended officially by the park because of dietary restrictions of birds.

The flying fox is another example of winged wildlife that the Royal Botanic Garden hosts, albeit reluctantly. The trees where these furry-bats like to nest are increasingly being decimated by the species and there have been efforts to re-home the animals. But they can still be spotted in the trees of the park hanging out during the day.

If you just desperately miss that heavy, humid summer air, you’re in luck. Latitude 23 is a tropical paradise all inside a large glass building. The moisture is cranked up to replicate the equatorial region between the Tropic of Cancer and Capricorn (both located at 23° latitude, hence the name!). Amazing, non-native tropical plants thrive in this hot box glasshouse, so you can see exotic orchids, hoyas, bat-plants, Papua New Guinean tongue-lilies and more.

Stop by the Fernery next door where immense, lush ferns grow wild. From climbers, to hangers, to the tallest tree ferns from all over the world. The Fernery is liked you stepped in to an uninhabited jungle, where the plants rule the land.

From there, walk over to the succulent garden for an amazing look at some native Australian succulents and cacti.

Make sure you carve out some time for the Royal Botanic Garden when you’re in Sydney. Bring a blanket, pack a lunch and have a relaxing picnic in the park surrounded by some of the most amazing plant life and greenery in the city. It’s the perfect spot to spend a few hours idly strolling, either before or after your visit to the Opera House.