Museum of Old and New Art (MONA) in Tasmania - About Australia

Posted on: July 6th, 2017 by About Australia Staff No Comments

An eccentric billionaire opens an art museum in an island state off the coast of Australia. He puts up more than $200 million to fund the museum entirely himself; money he made gambling over the years using a system he devised to beat the odds. Unbeholden to investors or public funding, there is no one to veto the proposed theme of the museum: His predilection for death and sex.

If it were a movie, the tagline might go something like: “The story of how one man painted the town red after putting it all on black.”

But this isn’t a movie. And sometimes truth is stranger than fiction. See why one sleepy town in Tasmania has made a huge splash in the contemporary art world with the Museum of Old and New Art (MONA). 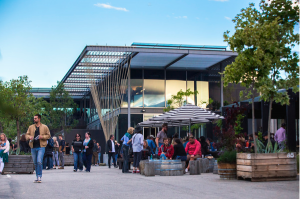 David Walsh, native Tasmanian and all-around eccentric, was something a math whiz. He dropped out of university and developed gambling systems to win big. By hedging bets on everything from blackjack, to thoroughbred racing, to basketball, Walsh proved his gambling systems again and again, amassing millions in the process.

Walsh and his gambling partner Zeljko Ranogajec became so well-known they were eventually banned from every casino in Australia and more abroad. Instead of quitting while ahead, he formed a group he called the Bank Roll. A sort of rag-tag “Ocean’s Eleven” crew of gambling wizards who taught their system to fresh faces who could hit the casinos for them.

And then he began collecting art, as billionaires are sometimes wont to do.

Looking for a place to display his collection, Walsh had the money to go anywhere. He could have opened MONA in Sydney or Melbourne, or even New York or London. Instead he chose a small town in Tasmania, just a few miles from where he grew up.

MONA is accessible by car or coach (just a 15 minute drive if you’re already in Hobart!), but for a grand entrance, take the ferry from Brooke Street Pier. You’ll feel like you’re embarking to the lair of some evil-genius-villain. You might be right.

Upon arrival, MONA is deceptively unassuming. The entrance requires visitors to walk across a full-size tennis court. A seemingly out of place imposition installed at the request of Walsh. The guy just really likes tennis.

The estate also houses an operating vineyard and winery. The museum bar and restaurant serve local Moorilla wine made on the estate. Whether this is an ironic statement about the bougie nature of more traditional museums or if Walsh is just really in to wine is yet to be determined. (Tip: Tour the museum and the vineyard for an inside look at David Walsh’s Moorilla Estate)

Once you enter the doors however, the true personality of MONA begins to unfold. Start by descending a staircase in to the expansive, subterranean vault below. The idea to start in the depths of the belly of the beast and snake your way to the light was intentional.

Walsh once described the museum as a “subversive adult Disneyland”. The interior structure is left raw. The walls are not adorned with sterile, white gallery paint. Instead the inside is all industrial, brutalist-inspired concrete and steel beams. A large mass of sandstone is imposing yet subdued. A central, steel staircase coils up like a snake, connecting all of the museum’s levels.

Pieces to Make You Think… Or Gasp in Horror

Walsh has curated a diverse collection ranging from the beautiful to the absurd. One key piece is an installation called Cloaca Professional by Belgian artist Wim Delvoye. The machine is “fed” food in to a large plastic bowl (or mouth) on one end. Then it follows a sort of Rube-Goldberg-esque process that mimics the human digestive system, enzymes, acids and all.

A few hours later, the other side of the machine produces an exact replica of the result of the human body’s own process. Maybe a commentary on the state of the art world as a whole, maybe just a really cool mix of chemistry, biology and creativity.

MONA even has a rigid schedule for this piece: Feeding at 2 p.m. Excretion at 5 p.m. Just like clockwork.

To be clear, MONA is not all shock and no awe. The changing antiquities collection boasts a range of pieces from mummy sarcophagi to an Aboriginal-inspired mosaic of a snake, made up of nearly 2,000 individual paintings.

With no arrows, maps or other directional cues, visitors are encouraged to explore for explorations sake. There is no right way to see MONA and no incorrect path to take in the sometimes maze-like, dimly lit cavern.

You could see a centuries old antique followed up by a contemporary art piece called Bit.fall, where a dripping waterfall spells out select headlines from the day’s news.

Visitors are provided with an iPod touch loaded with museum-specific software. As you happen upon different pieces from the collection, you can view the piece’s name, the artist and more background information than you could ever hope for. A much more in-depth experience than a tag on the wall.

Devil is in the Details 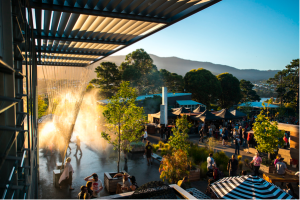 MONA has taken the art world by storm and singlehandedly put Tasmania on the art-world map. The Australian state once banked its tourism industry solely on their rugged, beautiful outdoor landscapes. Now, it’s attracting visitors from all over the world for the subversive museum, arts and culture.

The self-described “secular temple” for the arts is a free-form expression of the mind of one eccentric individual. Stuffy this museum is not. MONA is certainly a must-see if you’re in Tasmania, but the museum is worth the trip to Australia in itself.

Tasmania is quickly becoming a top destination for visitors to the country. The island state has been rated in the past as a worldwide top destination and you could make an entire trip out of Tasmania alone. But since it’s such a quick jaunt from the mainland, you’ll definitely want to extend your trip to see everything Australia has to offer in one epic vacation.

Add MONA to My Trip